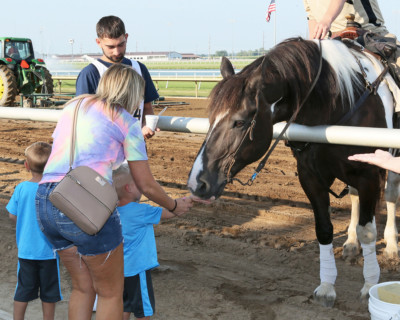 Indiana Grand Racing & Casino participated in the national “PDJF Racing Across America” Saturday, July 27. The entire evening was dedicated to raising funds and awareness for the Permanently Disabled Jockeys Fund, an event that was held across North America and various racetracks.

Indiana Grand jockeys participated in several activities throughout the night, including a Jockey Foot Race from the starting gate, a Tug of War with the track maintenance crew and a dunk tank. Also, racing fans purchased used racehorse shoes provided by Paddock Blacksmith Buddy Rickly and sold out. Peppermints were also sold to feed to the pony horses between several races during the popular “Peppermints for Ponies” with all proceeds going to PDJF.

In addition to the activities for PDJF, a portion of the evening was dedicated to “Back to School” activities, providing younger racing fans will all types of free activities. Woody and Buzz Lightyear from Toy Story made a special appearance while kids enjoyed face painting, a coloring station, Silly Safari animals, an inflatable and airbrush tattoos. Also, the Indiana HBPA provided eight backpack giveaways throughout the night along with a Dell laptop giveaway that was won by William Bishop of Clark Pleasant Middle School in nearby Whiteland, Ind.

The Indiana HBPA also donated $10,000 to PDJF in a special presentation between races. The organization is also very involved with the annual “Jockeys and Jeans” event held annually to support PDJF.

Rodney Prescott, Indiana’s all-time leading jockey, took a turn in the dunk tank and was part of the team that defeated the track maintenance crew in the Tug of War. Prescott, who is secretary of the Jock’s Guild, takes part in the activities each year to raise funding and awareness for PDJF.

“The PDJF is so important to our industry, and I’m really glad we can participate in this national event,” said Prescott. “It’s always a lot of fun and the jockeys really enjoy the entire night.”

Several hundred dollars were raised for PDJF through the activities during the night. Also, trainer Genaro Garcia, current leading trainer at Indiana Grand, and his owner, Bruce Murphy, made a $300 donation to the cause.

“We actually had to turn away jockeys from the foot race, we had so many wanting to participate,” said Steve Cahill, clerk of scales at Indiana Grand. “These guys really enjoy this night and once again the jockeys remain undefeated in the tug of war. We weighed the jockeys and 12 jockeys were right at 1,335 pounds compared to seven track maintenance crew members who weighed in right at 1,340 pounds. Hats off to the track crew for coming over and participating in the tug of war. It is always a lot of fun and the main thing is to raise funding and awareness for PDJF.”