You Can Help | Donations 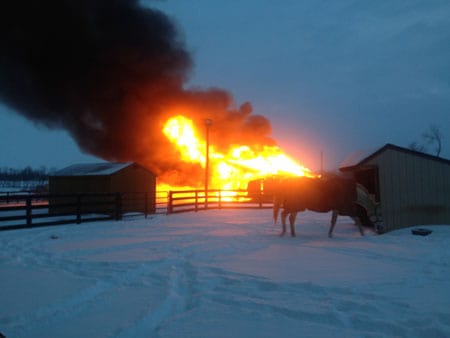 The NHBPA assists horsemen when disasters like fire, tornadoes and hurricanes strike.

In 50 years on Churchill Downs’ backstretch, trainer William “Jinks” Fires never thought he’d have to worry about a tornado hitting the barn area not far from downtown Louisville.

But in 2011, Fires’ barn was among those severely damaged by a tornado with EF1 strength and wind speeds of 105 miles an hour. It was the latest in disasters Fires’ operation has endured during his long career, including tornadoes at Arlington Park, flooding in the wake of the tornadoes and the fire that burned down Washington Park and killed all the trainer’s horses.

“Anything can happen,” Fires said. “And when it does, you see why the HBPA’s motto is ‘horsemen helping horsemen.’”

The National HBPA Foundation (NHBPAF), a tax-exempt 501 (c)(3) fund, was developed as a safety net for horsemen when other forms of assistance are unavailable or have been exhausted after disaster strikes.

Michael Blowen, founder and president of the Old Friends Thoroughbred retirement facility in Georgetown, Ky., was not aware of the foundation until he received a call from National HBPA CEO Eric Hamelback after a fire destroyed one of their barns in January 2016. Money from the NHBPAF and other donors allowed Old Friends to build a state-of-the-art replacement barn. 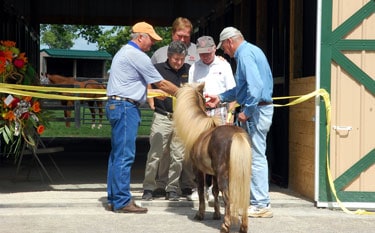 Terence Collier of Fasig-Tipton, former jockeys Jean Cruget and Chris McCarron, veterinarian Dr. Bryan Waldridge, Old Friends founder Michael Blowen and Little Silver Charm celebrate with a ribbon-cutting to open a new barn built with funds donated by the NHBPAF and many other associations and individuals.

“They’ve been great to us,” Blowen says of the NHBPAF. “I didn’t even know they existed, and now I do. We’re extremely grateful. It’s not just the money and not just our barn. I think it’s the great acknowledgement of the HBPA that we’re all in this together. It was a great acknowledgement that they think aftercare, in all of its permutations, is valuable. I know the HBPA supports not just us but other organizations as well.”

The day after Hurricane Katrina devastated much of the Louisiana racing and breeding industries, both existing and donated funds were channeled through the NHBPAF to Louisiana horsemen via the Louisiana HBPA. More than $400,000 in cash donations and 160,000 tons of equine and human supplies were raised with the aid of the NHBPAF.

Those were high-profile cases. But the NHBPAF and the National HBPA Assistance Committee – which manages the NHBPA Foundation and reviews assistance requests – continues its work out of the limelight.

The new barn will help Old Friends in its goal to provide a dignified retirement to Thoroughbreds whose racing and breeding careers have come to an end.

When several horsemen stabled at Turfway Park in Kentucky endured a month-long quarantine due to equine herpesvirus (EHV-1) in 2005, they faced the same daily costs of running a racing stable without the possibility of earning back revenue through purses. As in similar quarantine cases, the NHBPAF stepped in to help by subsidizing daily feed costs, in this case covering 91 horses over 30 days.

The NHBPA Foundation more recently helped feed horses after equine herpes outbreaks in Pennsylvania, Iowa and Nebraska. The foundation was there to assist horsemen after flooding in Arizona.

“When things happen to us that are beyond our control, it’s a relief to know that the NHBPA Foundation is there to help, especially with financial assistance, what we tend to need most,” said trainer Chuck Simon.

I wish to donate to The National HBPA Foundation: