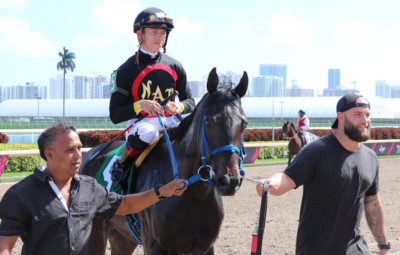 Napoli, who was born in nearby Hollywood and grew up in Pembroke Pines, FL, ventured into Thoroughbred ownership after officially announcing his retirement from baseball in December after 12 seasons in the big leagues.

“It feels great to be here and get my first win. It’s exciting to do it with all my friends,” said fan-favorite Napoli, whose first winner was also a fan favorite at 3-2 odds. “I’m happy to be here. It’s a special time.”

Napoli played in three World Series while playing for the Texas Rangers, Cleveland Indians and Boston Red Sox. The 37-year-old veteran, who was a catcher, first baseman and a designated hitter, played on the Red Sox’ 2013 World Championship team.

Napoli is no stranger to South Florida Thoroughbred racing.

“When I was little my grandfather would take me to Calder – Gulfstream West now. I always loved it,” said Napoli, who was an All Star in 2012 with the Rangers. “I’m from the area. It’s great.”