Good news for Tiz the Law after jaw-dropping Holy Bull: There’s room for improvement in 12 weeks until KY Derby 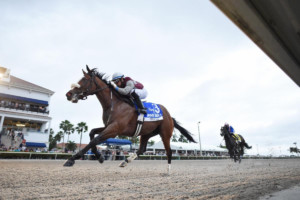 Tiz the Law turned heads, dropped jaws and dazzled the peanut gallery in winning the Holy Bull Stakes at Gulfstream Park last Saturday. “There’s your Derby winner,” more than one self-anointed expert was heard to say. And he might be right, like the broken watch. But here’s the rub, as the poet would say: As good as that Holy Bull performance was, it probably wasn’t good enough to win the Kentucky Derby.

With these 3-year-olds, the most important variable, aside from talent, is development. How much do they have to improve to reach a Derby-level of performance, and how far can they progress over the next 12 weeks? Development is essential. Funny Cide, who was owned by the Sackatoga Stable, which also owns Tiz the Law, provides an instructive example. In 2003, Funny Cide also began his campaign in the Holy Bull, but in a very different way from Tiz the Law. Funny Cide had post position No. 13 and, as it turned out, a very tough afternoon. He hit the gate, raced very wide and finished fifth; so, quite understandably, he promptly left town. At Fair Grounds in New Orleans, he took a significant step forward: He set a rapid pace, faltered momentarily, but then fought back to finish third in the Louisiana Derby. He then took another step forward in the Wood Memorial, where he got bumped around leaving the gate but settled nicely off the pace and finished well to be second. One step, a second step and if he had within him a third step forward, if, in other words, the development could continue, he would surely run the best race of his life up to that point — or, as it turned out, the two best races: Funny Cide, of course, followed his Derby victory with a romp in the Preakness, winning by almost 10 lengths.

Tiz the Law is further along than Funny Cide was at this point; his Holy Bull couldn’t have been better. Or, at any rate, it’s probably advantageous that it wasn’t better; hitting a peak on the first of February rarely spells success in May. Fresh from a layoff, Tiz the Law actually jumped to the lead at the start of the Holy Bull and was full of energy, but Manuel Franco, his rider, did an excellent job of getting the big colt in hand. Down the backstretch, still eager, Tiz the Law found himself blocked on the inside behind the leader and had to be checked, but, again, that was, as it turned, advantageous for the long term. Franco moved Tiz the Law to the outside, and from there, well, the outcome was inevitable. But the performance left room for improvement: Once clear in the lane, Tiz the Law lugged in; and so he’ll need to learn the geometry of straight lines, as well as the value of patience.

So Tiz the Law is already further along than anybody else in the class, but Thousand Words made a useful appearance in winning the Robert Lewis at Santa Anita, and Max Player might have inspired some dreams by taking the Withers in New York. With the progress that can reasonably be expected, they could arrive at that Derby level of performance in 12 weeks. In fact, many 3-year-olds are within reach of that level, some requiring a little more imagination than others, for some are so inexperienced they’ve raced but once, horses such as Nadal, Great Power, Violent City and Exaulted. Then there are the sparkling enigmas, horses such as the Florida flash Chance It, who won the Mucho Macho Man Stakes in a tenacious effort, and Maggi Moss’ Louisiana lightning bolt No Parole, who has won his two races by a total of 27 1/2 lengths. He’ll make his two-turn debut Saturday night at Delta Downs. And what about Structor, who’s unbeaten in three outings on the turf, including two stakes, and the Japanese and European possibilities? They’re all converging on the first Saturday in May, but they all must develop and improve to get there.

This week’s races could offer some clarity. Independence Hall, who’s in line for a role in “Bad Boys 4,” needs to show some development when he returns in the Sam Davis at Tampa Bay. And the champ returns this weekend, Storm the Court starting his campaign in a beautifully reasonable place, Sunday’s San Vicente. But even if these races clarify, many, many questions will remain, for you know what Winston Churchill said about the Derby: It’s “a riddle, wrapped in a mystery, inside an enigma.” (Yeah, yeah, but he said it about the Derby first.)