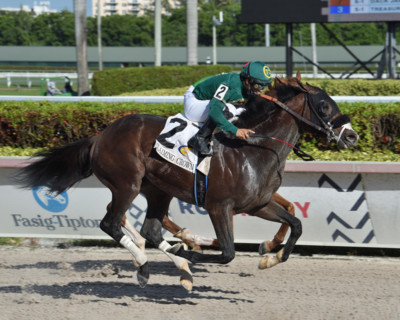 The Jewel headlined the 22nd edition of the Claiming Crown, a nine-stakes event that pays tribute to the claiming horses that provides the backbone of day-to-day racing programs at racetracks throughout the country.

Jesus’ Team hadn’t won in six starts since defeating $25,000 claimers at Gulfstream May 8th, but the 3-year-old son of Tapiture earned 2-5 favoritism Saturday after finishing third in the Preakness Stakes (G1) at Pimlico and the Breeders’ Cup Dirt Mile (G1) at Keeneland in his two most recent starts.
“I think the race was good for him because he only had the one work since the Breeders’ Cup. After the Breeders’ Cup he was in Ocala in a round pen and small paddock,” trainer Jose D’Angelo said. “I think he’s going very well into the Pegasus World Cup.”

Ridden by Luis Saez, Jesus’ Team saved ground while racing directly behind Storm Runner, who set fractions of 23.14 and 46.40 seconds for the first half-mile of the 1 1/8-mile stakes for horses that had raced at least once for a claiming price of $35,000 or lower in 2019-2020. Storm Runner, who finished off the board in the 2019 Fountain of Youth (G2) and Florida Derby (G1), set an uncontested pace along the backstretch and around the far turn under Corey Lanerie before entering the homestretch with a clear lead. Saez eased Jesus’ Team off the rail coming off the turn into the homestretch, and the overachieving colt gradually wore down the pacesetter to prevail by three quarters of a length.

“This is a very nice horse, who ran a very big race last time. I knew today would be a little tough, because he ran so big last time out, but he has such a big heart,” Saez said. “Today, I had to ride him a little hard, but he gave me that kick and always tries. He’s a nice horse.”

“I know the speed might be hard to beat, so I’m very happy with his race,” D’Angelo said.

Dale Romans-trained Storm Runner, who won a $20,000 claiming race and a starter allowance race in his only two starts this year, finished two-lengths ahead of Dack Janiel’s, who had stalked the pace outside Jesus’ Team.

After winning the $25,000 claiming race in May and finishing second behind graded-stakes winner Sole Volante in an allowance in June at Gulfstream, Jesus’ Team finished fourth in the Haskell (G1) and second in the ungraded Pegasus at Monmouth. He went on to finish third in the Jim Dandy (G2) at Saratoga before earning Grade 1 placings in the Preakness and Dirt Mile.

“I am very sure he’s going to improve because this race worked out very good for him,” D’Angelo said. “I can give him some days off and prepare him for the Pegasus World Cup.”

D’Angelo was a champion trainer in Venezuela and saddled his first starter in the U.S. after venturing to South Florida in June 2019.