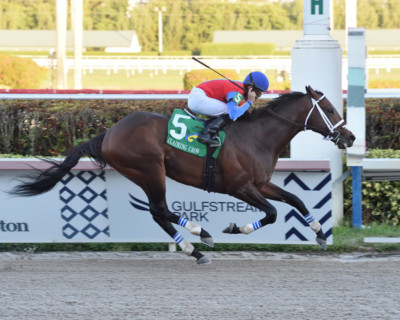 Ara Aprahamian’s Leitone made an already great day even better for trainer Jason Servis Saturday while scoring a convincing 2 ½ -length triumph in the $200,000 Jewel at Gulfstream Park.

The Jewel, a 1 1/8-mile stakes for horses that have started for a claiming price of $35,000 or lower, was the headliner of nine stakes on Saturday’s Claiming Crown for the blue-color horses that are the backbone of the Thoroughbred racing industry’s day-to-day programs.

Shortly after the Servis-trained Maximum Security rolled to an easy triumph in the Cigar Mile (G1) at Aqueduct, Leitone dominated eight rivals in the Jewel. Servis’ stable, which earlier won the $110,000 Canterbury with Shekky Shebaz, capped a big day with Muggsmatic’s victory in the $125,000 Emerald.

Leitone, who was claimed for $12,500 at Belmont Park June 16, gained good position directly behind pacesetter Create Again, who posted fractions of 22.70 and 45.93 seconds for the first half- mile. Create Again continued to lead into the far turn before shortening strides and being overtaken by Leitone on the turn into the homestretch. The Servis-trained 4-5 favorite was never threatened thereafter while winning for the third time since behing claimed.

“This is the kind of horse that you keep asking, and he’ll keep running. He’s got a long stride and doesn’t stop, he’s a very nice horse,” jockey Jose Lezcano said. “The other horses in the race were sent early on and I gave him at least a half a mile before asking him to go and when I did, he went on to win easy. I had so much horse the whole way and still had some left in the tank.”

Leitone ran 1 1/8 miles in 1:49.54 while winning comfortably. Noble Thought closed to be second, a half-length ahead of Holiday Bonus.

Leitone, a multiple Group 1 winner in Chile, is undefeated in three starts on dirt since being claimed out of a 13 ¾-length victory over Belmont’s main track. The son of Dunkirk finished third on turf in his first start for Servis, before winning a $50,000 claiming race at Saratoga. After finishing off the board in a optional claiming allowance on turf, he tuned up for the Claiming Crown with a 7 ½-length victory in a $50,000 claiming race at Belmont Oct. 25.