An In-Depth Look at Stall Contamination 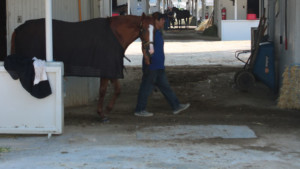 This story is important because it involves, to our knowledge, the first-ever broad-based high-sensitivity testing of ship-in stalls at a North American racetrack. The story begins in August 2015, when Charles Town Races changed its drug-testing contract to the highly capable Denver-based Industrial Laboratories and also adopted the Racing Medication and Testing Consortium (RMTC) controlled therapeutic medication schedule.

One unanticipated outcome of these changes was the appearance of a sporadic sequence of low-concentration naproxen positives, mostly among trainers shipping in from Mid-Atlantic states to race at Charles Town. As of January 1, 2017, these identifications were all in plasma and ran from a miniscule 6.3 ng/ml to 161 ng/ml. Although these plasma concentrations of naproxen are readily detectable by modern, high-sensitivity testing methods, these concentrations are not pharmacologically significant, especially given that the neighboring Mid-Atlantic states were regulating naproxen at a 1,000 ng/ml plasma threshold.

Where were the naproxen positives in the Charles Town ship-ins coming from? One possibility suggested by horsemen was that the ship-in stalls themselves were naproxen-contaminated, providing a ready source of the naproxen positives. Responding to this suggestion, West Virginia Racing Commission personnel swabbed the ship-in stalls and sent the samples to Industrial Laboratories for analysis, leading to some, shall we say, very interesting findings.

Presented below are data from the reports from Industrial Laboratories to the West Virginia Racing Commission obtained under a public records request by the Charles Town HBPA. We do not know precisely how the stalls were swabbed/sampled; nevertheless, the results are very interesting indeed. And, by way of background, the total number of ship-in stalls tested was 21, and of that number, only four were negative for detected medications/substances, starting with human recreational substances, as presented in Figure 1. One additional stall had straw tested, and the straw was negative. 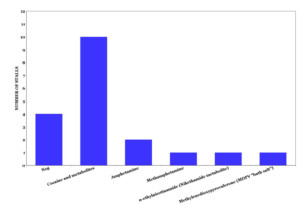 As shown in Figure 1, cocaine and its metabolites benzoylecgonine (BZE) and ecgonine methyl ester were, not surprisingly, the most frequently identified substances, identified in 10 of the ship-in stalls tested. This finding is fully consistent with the widespread human recreational use of cocaine and its well-established presence as a trace-level environmental substance in human environments. Traces of cocaine can be found on 92 percent of circulating U.S. dollars. As a result of the ubiquitous presence of cocaine in the human environment, the Federal Aviation Administration, Nuclear Regulatory Commission and the U.S. Department of Transportation have adopted a screening level of 150 ng/ml of its BZE metabolite in human urine as not unusual and indicative of nothing more than inadvertent exposure of the human to trace-level amounts of environmental cocaine. Similarly, some horse racing jurisdictions have adopted a BZE screening limit, ranging from 50 ng/ml to 150 ng/ml in a post-race urine sample. 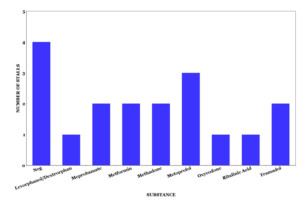 Not entirely unexpectedly, there was one identification listed as levorphanol/dextrorphan, presumably a passed-through metabolite of dextromethorphan, the active substance in a number of over-the-counter medications such as NyQuil, as evidenced in a number of recent dextrorphan identifications in Kentucky associated with the use of NyQuil by the groom of at least one of the involved horses. Finally, there was an identification of ritalinic acid, presumably associated with urination in the ship-in stall of an individual medicated with methylphenidate/Ritalin. These ship-in stall findings of tramadol, oxycodone and dextrorphan come as no surprise to the racing community, with these substances being identified as human prescription and over-the-counter medications long suspected of transferring from humans to racehorses and giving rise to trace-level urinary identifications of these substances. 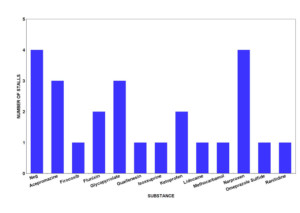 Finally, the equine substances (Figure 3) present in the ship-in stalls totaled 21 individual identifications. The status of naproxen was reported as “high-concentration” in four stalls but was apparently detected at a low level in almost all of the tested stalls, consistent with its posterchild status as an environmental substance. Three stalls each tested positive for acepromazine and glycopyrrolate, which is somewhat surprising for these relatively low-dose medications. Two stalls each tested positive for ketoprofen and flunixin. The flunixin findings were consistent with its long-established role as a stall contaminant, even when administered as an IV medication. There was also one stall identification each of firocoxib, a high-dose non-steroidal anti-inflammatory; guaifenesin; isoxsuprine, another poster child for stall contamination; a somewhat unexpected lidocaine; a fully to be expected methocarbamol; and two not unexpected equine/human anti-ulcer medications, omeprazole and ranitidine.

THE CASE FOR ENVIRONMENTAL EXPOSURE GROWS
This space in The Horsemen’s Journal has been repeatedly filled with examples of positive tests resulting from inadvertent environmental exposure that have been implicated from sources as widely varied as contamination from a groom’s hands of common cold remedies to the horse’s own urine. We have discussed possible transfer from human urine, traces of medication on hay nets, commingling of human prescriptions with tongue ties in pockets or even transferred from the hands of an assistant starter onto the horse’s mucous membranes. While some of these sources could be readily limited by strict control by the trainer, others are completely outside the control of horsemen. Nonetheless, the absolute insurer rule counts these meaningless positive tests as equal to intentional administration of performance-enhancing drugs. Some regulators, such as the Kentucky Horse Racing Commission, in the case of dextrorphan, have come to the logical conclusion that some such trace-positive findings are irrelevant, whereas others continue to adhere to their outdated zero-tolerance regulations.

THE EVIDENCE
Drugs in the environment are an emerging problem, not just for horse racing, and it has entered the radar screen of our national regulatory bodies. The Environmental Protection Agency commissioned a study evaluating the effluents of 50 large wastewater treatment plants and found measurable levels of 56 different pharmaceuticals, with a diuretic, hydrochlorothiazide, being found in every sample analyzed. Among the drugs found were hypertensive medications, metoprolol, atenolol, enalapril and narcotics, including hydrocodone and oxycodone. Some of these drugs result from the flushing of prescription drugs down the toilet, but most are actually from the urine of humans taking the drugs. The levels of these environmental contaminants in wastewater are mostly very low, unlikely to cause positive tests in racing horses, but it underscores the significance of contamination in the environment. Environmental contamination happens, with many of these drugs stable enough in the environment to remain in the water even after wastewater treatment.

More common sources of inadvertent environmental exposure for horses are the horses themselves, the grooms in constant contact with the horses under their care and others like racing officials. There has been credible evidence of contamination of horses by casual contact with grooms, paddock judges and assistant starters, and even contamination of blood or urine samples during or after collection in the test barn. All of these positive tests have been at very low, trace levels of identification, usually in urine, and at levels well below those that may affect the physiology of the animal.

The problem of inadvertent environmental exposure was first outlined in a group of scientific papers published in 2000 at the International Conference for Racing Analysts and Veterinarians. In those proceedings, naproxen, ibuprofen, isoxsuprine and flunixin were all shown to have positive tests consistent with violations after exposure to very low concentrations of these drugs. In 2006 chlorpheniramine, dipyrone and meclofenamic acid were added to the list of drugs for which such positives could be demonstrated. Recommended limits of detection were suggested for therapeutic medications to avoid these irrelevant positives from inadvertent environmental exposure.

At 24 hours after the drug was given, a horse was moved to a clean stall in which no horse had been given flunixin. The findings were simple: All groups, except the horse that was moved to a clean stall, experienced positive tests associated with recycling of flunixin from the stall. The highest risk of a positive test from this stall contamination was in the group with thin bedding completely stripped daily.

DRUGS IN THE ENVIRONMENT
In 2008 Dr. Steven Barker performed a survey of the test barn and receiving barn stalls at a racetrack in Louisiana. He sampled the dirt floors, consciously avoiding regions of high suspicion, such as obvious areas of urine and fecal contamination, collecting about 1 ½ ounces of dirt to screen for drugs. He looked for common equine therapeutic medications, caffeine and cotinine, a metabolite of nicotine. Phenylbutazone, flunixin, naproxen, caffeine and furosemide were all readily identified in those stall samples, and all of the samples collected contained cotinine. While none of those drugs were present in sufficient concentrations to actually trigger a positive test, this study shows that, even in what are expected to be the cleanest areas on the backside—the test and receiving barns, where horses are generally not actually treated with drugs routinely—the environment is contaminated with medications.

In the last edition of The Horsemen’s Journal, we outlined an investigation of a cluster of naproxen positives at Charles Town. As stated earlier, the stalls in the receiving barn were swabbed and tested for drugs in the environment as part of the investigation by the West Virginia Racing Commission into this incident.

Several points can be surmised from the results. First, many of the substances found in the stalls at Charles Town are found in trace concentrations in post-race samples, often with the trainer and owner left wondering where they came from. Second, these were the substances found in the ship-in barn, and some substances, such as equine therapeutics, would be expected to be much higher in the horses’ home stalls. Third, it is critical that these studies be repeated at racetracks across the country; the absolute insurer rule cannot hold a trainer responsible for substances inadvertently picked up by a horse in a receiving barn, test barn or other area not under their direct control. Finally, these issues can readily be addressed using recommended screening limits, like the limits of detection originally recommended by Duluard and others in 2006, for substances of inadvertent environmental exposure.

RCI MODEL RULES
ARCI-025-020§H2 recognizes that “substances of human use and addiction and which could be found in the horse due to its close association with humans” should be identified, but as yet, there are no screening limits established for such substances in the model rules.

The National HBPA and North American Association of Racetrack Veterinarians have joined together to propose screening limits for three of the substances of concern, two of which are prominently featured in the Charles Town investigation: methamphetamine and cocaine and its metabolites. We urge jurisdictions to consider our proposal in light of the evidence outlined in this article and join us in moving horse racing past the penalizing of our horsemen and owners because of highly sensitive testing equipment.