The most important number for trainer Ron Moquett this year at Oaklawn might be 75. More specifically, it’s $75,000, the eye-popping purse amount to begin the meeting for maiden special weights runners.

Moquett, who lives adjacent to Oaklawn’s backstretch, has approximately 40 horses on the grounds. Roughly half are maidens. Roughly half of those maidens are unraced, with a handful of others only having one career start.

Seemingly all are aiming for that $75,000 prize, the highest maiden special weights figure to begin an Oaklawn meeting. 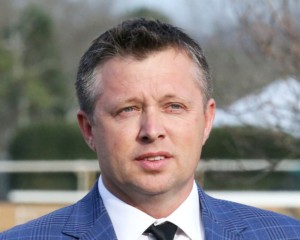 “The majority of my owners are from Arkansas, or are motivated to perform well in Arkansas,” Moquett said Thursday morning. “We want to run well at Churchill, Keeneland. But, we also really want to run well here.”

Many of Moquett’s unraced 3-year-olds are well-bred prospects for the trainer’s major client, Alex and JoAnn Lieblong of Conway, Ark. Among the couple’s horses that should be seen at the meeting, Moquett said, are the fillies She Beast and Area.

She Beast (by The Factor) is a half-sister to The Big Beast, a Grade 1-winning sprinter campaigned by the Lieblongs. Area is by 2007 Kentucky Derby winner Street Sense. Her dam, Isabell’s Shoes, won the $50,000 Martha Washington Stakes for 3-year-old fillies in 2005 at Oaklawn. She Beast and Area were purchased for $350,000 and $140,000, respectively, at public auction.

Another unraced 3-year-old filly to watch, Moquett said, is Spark Joy, a daughter of Creative Cause who was purchased for $100,000 at the Fasig-Tipton Midlantic 2-year-old in training sale. Spark Joy is owned by the It’s All About the Girls Stable LLC, which also campaigns impressive 2017 Oaklawn debut winner Our Majesty with Moquett.

“It looks like we’re going to need them to be,” Moquett said, pointing to the strength of Steve Asmussen and Brad Cox, first and third, respectively, in the 2017 Oaklawn trainer standings. “If this would have been three years ago, this group of maidens would have won a bunch of races. But, now we have to step it up. Looking at the overall horse picture here, being somebody that’s been here for a long time and sits up in the box and watches everybody’s horses, it would be a great year to be a fan here. There are some bad-ass horses here.”

Moquett was Oaklawn’s co-sixth-leading trainer last year and has 198 career victories in Hot Springs since 1999. He saddled 20 winners at the 2017 Oaklawn meeting.

Jockeying For Position
Add David Cabrera to the growing list of riding newcomers at the 2018 Oaklawn meeting scheduled to begin Jan. 12.

Cabrera said he normally rides at Sam Houston in the winter and is anxious to test his skills at Oaklawn for the first time.

Cabrera finished second in the rider standings last year at Prairie Meadows and third at the recently concluded Remington Park meeting. The rider said he hopes to have some business at Oaklawn for, among others, Ron Moquett.

Agent Gene Short of Hot Springs said the reason for all the new blood is simple. It’s all about Oaklawn’s lucrative purse structure.

“It’s just strictly because of the money,” said Short, who represents Alex Canchari, Oaklawn’s co-third-leading rider last year, and Luzzi. “Where else are you going to get a $75,000 (maiden) special weight? It will be interesting to see how long everybody stays.”

Finish Lines
There were 1,289 horses on the grounds Thursday morning. … There was no training Thursday because of a frozen racing surface. … Whitmore and Petrov are scheduled to arrive Saturday following a freshening for both in Kentucky, trainer Ron Moquett of Hot Springs said Thursday morning. Whitmore was Oaklawn’s top sprinter last year, winning all three starts, including the $400,000 Count Fleet Sprint Handicap (G3). Petrov ran second in the $150,000 Smarty Jones Stakes and $500,000 Southwest Stakes (G3) for 3-year-olds last year at Oaklawn. … Nominations to the $125,000 Fifth Season Stakes for older horses Jan. 12 close Thursday. Entries for the Jan. 12 opening-day program will be drawn Monday.