Asmussen ready when Kentucky Derby chooses him. ‘It’s in the works. It just hasn’t happened yet’ 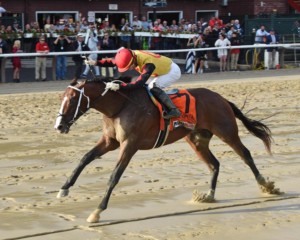 On the road to Kentucky
By Gary West

Have you ever won the Kentucky Derby?

That’s the question everyone asks because that’s the race everyone knows. A few races are richer and a few might possess more championship heft, but throughout America’s vast cultural landscape, on the promontory of popular awareness, only the Kentucky Derby sits so high that everyone can see it. And on the first Saturday in May, the entire nation stops to watch. So, have you ever won the Kentucky Derby?

“I get asked that question all the time,” trainer Steve Asmussen said.

The fellow traveler in the next seat on the airplane asks; the cabbie asks on the way to Belmont Park; the waiter asks after describing the day’s specials. Nobody asks if you’ve ever won the Preakness, or the Kentucky Oaks, or the Breeders’ Cup Classic, or the Dubai World Cup or the Pegasus World Cup. They all ask, “Have you ever won the Kentucky Derby?”

The question, since it reveals an abiding interest and a benign curiosity, doesn’t annoy so much as amuse. Asmussen has come to expect the question, and he has a stock reply for it. The trainer, of course, could respond by pointing out that although he hasn’t won the Derby, he has won just about everything else, from New York to California to Dubai. In fact, the Texan has saddled more winners and won more races (8,735) than any other trainer in the country, and on his current pace he’ll become horse racing’s all-time leader next year. Or he could point out that he’s in the sport’s Hall of Fame or, even better, that on four occasions he has trained the Horse of the Year — Curlin (twice), Rachel Alexandra and Gun Runner. Not since Ben Jones teamed up with the legendary Calumet Farm back in the 1940s has a trainer developed so many Horses of the Year. But, no, Asmussen doesn’t mention any of that in response to the Derby question.

“When somebody asks me that,” Asmussen explained, “I say, ‘No, I haven’t won it, but I’ve started more horses in the Derby without winning it than anybody else.’” And in saying that, he must sound like the guy who points out that on Aug. 4, 1921, can you believe it, frogs rained on Calgary, Canada.

But it’s true, for the moment: Asmussen leads in the frustration Derby, having saddled 20 horses in the first event of the Triple Crown, with two seconds and two thirds and no victories. But he can be self-deprecating about his Derby worksheet because he knows his overall record is incomparable and, most of all, because he’s certain that one of these grand, roseate affairs on one of these clock-stopping, attention-grabbing first Saturdays in May will be his. He’s 54, and so it’s possible, even likely, that he’ll win multiple Kentucky Derbies before he’s done.

“It’s there,” Asmussen said about a Derby victory, as if he could make it out clearly, somewhere in the distance. “It’s in the works. It just hasn’t happened yet.”

But it’ll happen soon, maybe as soon as this year. Asmussen has a deeply talented group of 3-year-olds in his care, with several of them pointed in the general direction of the 146th Kentucky Derby. He likes the group very much, he said, but nobody has stepped forward to proclaim himself the next Curlin or the next Gun Runner, not yet anyway.

Still, rarely has anybody trained so many talented youngsters that are within reach of the sort of performance that could put them in the Kentucky Derby. In the recent Smarty Jones Stakes at Oaklawn Park in Hot Springs, Ark., for example, Asmussen sent out a quartet of starters, including Gold Street, who led throughout for his third consecutive victory.

The Asmussen contingent also includes Silver Prospector, Shoplifted and Halo Again, who all won stakes races last year. Shoplifted, Asmussen said, “has a lot left.” And Silver Prospector, although fourth in the Smarty Jones, “finished up strongly,” which is encouraging for the longer races ahead.

And then there’s Silver State, who finished second in the recent Lecomte Stakes at Fair Grounds in New Orleans despite a journey that might have been more appropriate for the Chisholm Trail. He has had trouble at the start in all three of his races; he has been wide and bumped and generally hindered and hampered. Does he have a trouble-seeking propensity? Maybe, but these are youngsters, all of them still learning and still improving, and Asmussen said he remains optimistic about Silver State.

But the most accomplished colt among the Asmussen group is Basin. After a fast maiden victory, he won the Hopeful Stakes at Saratoga by more than six lengths. Preparing for his return to competition, he has put in two half-mile workouts at Fair Grounds. But he could make his first stakes appearance of the season, Asmussen said, at Oaklawn Park.

In the coming months, could one of the Asmussen youngsters proclaim himself to be the next Gun Runner? Of course, but not even that would ensure a roseate victory because the Kentucky Derby is more than a horse race, more even than the most famous of races. It’s an event, Asmussen said, a spectacle. Circumstances swirl wildly and unpredictably, often determining the outcome. Being the best horse isn’t enough. Curlin was the best horse of his generation, so was Gun Runner, and they both finished third in the Derby. Superior talent isn’t enough, not in the shadows of the Twin Spires on the first Saturday in May. The Derby can be so enigmatic and inscrutable that sometimes it’s as if a horse doesn’t win it so much as get chosen to share in its glorious history. Then, too, the Derby can pluck a nobody out of nowhere — Mine That what? — and drop him into the winner’s circle.

Todd Pletcher saddled 24 horses in the Derby before winning it in 2010 with Super Saver. D. Wayne Lukas saddled 12 Derby losers before he found the winner’s circle in 1988 with Winning Colors. There’s a Derby for Asmussen, too. He can see it, it’s out there, and when it chooses him, he’ll be ready.