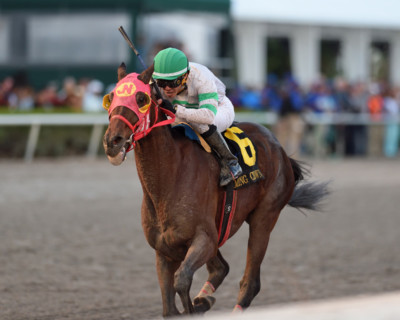 Aztec Sense sewed up 2018 Claiming Crown Horse of the Year honors in an 8-for-8 season capped by winning the $200,000 Claiming Crown Jewel at Gulfstream Park. (Kenny Martin photo)

Joseph Besecker’s Aztec Sense has been selected as the National HBPA’s 2018 Claiming Crown Horse of the Year following a remarkable season in which the 5-year-old gelding went 8 for 8 and earned $408,540, his five stakes capped by the $200,000 Claiming Crown Jewel at Gulfstream Park.

The National Horsemen’s Benevolent and Protective Association selects its Claiming Crown Horse of the Year from horses that participated in the 2018 Claiming Crown championships. The winner is chosen by the NHBPA Industry Awards committee.

The Claiming Crown was created by the National HBPA and the Thoroughbred Owners and Breeders Association (TOBA) to stage a Breeders’ Cup-style championship for claiming horses, the blue-collar workhorses that are the backbone of most tracks’ racing programs.

Besecker, who currently ranks No. 3 in North America with 118 wins this year and eighth in purses at more than $3 million, views the Claiming Crown Horse of the Year Award as recognition of his philosophy that he calls the three Ps.

“If you have the right process and the right people, you’ll get performance,” he said. “… I’m a claiming owner; I’m not a $200,000, $400,000 buyer of 2-year-olds or yearlings. I love the Claiming Crown, the concept of the Claiming Crown. The people who run it deserve a lot of credit because they treat the meat-and-potatoes people like the Breeders’ Cup. I’ve been a fan of the Claiming Crown for a long time. You’re recognizing what really is the every day people of racing, the claiming part. That’s where I am.”

The Claiming Crown Horse of the Year Award will be presented Sept. 7 at TOBA’s 34th annual Red Brand National Awards Dinner at Fasig-Tipton in Lexington. The National HBPA, which represents about 30,000 Thoroughbred owners and trainers throughout the United States and Canada, is a sponsor of the dinner.

More information about the dinner here

At Besecker’s request, trainer Jorge Navarro claimed Aztec Sense for $12,500 at Parx Racing two years ago after the gelding had lost a $25,000 claiming race by 32 lengths. The Kentucky-bred son of 2007 Kentucky Derby winner Street Sense won an entry-level allowance race in his first start for his new connections before ending his 2017 season with a fourth place in the $110,000 Claiming Crown Rapid Transit at seven furlongs. He is unbeaten since, including his only start at age 6 in the Grade 3 Fred Hooper on Gulfstream Park’s Pegasus World Cup card. That race also gave Navarro his 1,000th win as a trainer. It was bitter-sweet, however, as Aztec Sense came out of the race with an ankle chip.

“He had a surgery that went extremely well, and hopefully we’ll get him back to where he was,” Besecker said. “He’s back in training and doing really well.”

Besecker, who lives in Lancaster, Pa., owns a research and investment management firm. And he thought Aztec Sense had talent that hadn’t materialized when he was claimed.

“He showed some promise in some races early,” he said.”When he didn’t run well, they dropped him in for the $12,500. But he had a couple of really strong glimpses. Whoever had him every time, no matter if he was coming up a little short, they had to have liked him because they kept running in maiden special weight races. That was my whole point: ‘Look, these people must think they have something. The light bulb hasn’t clicked on yet, but it looks like they think it will.’ Luckily Jorge was there and he looked at him. He said, ‘Yeah, I kind of like this horse.’ So we took him. Then, in less than a week, he called and said, ‘We might have something pretty good here.’

“You get excited, but you don’t want to get too excited. When he ran at Gulfstream the first time in the Claiming Crown, we were pretty excited. But he got in all kinds of trouble. Then we just started him on the run. He’s won 10 of the 11 races we’ve had him. That is a dream. I’ve been claiming horses since the 1980s, and this is what you hope for. Doesn’t always work out.”

Aztec Sense earlier this year was named Parx Racing’s 2018 Horse of the Year. The gelding won four races at Parx, his three stakes there including the $150,000 Pennsylvania Derby Champion Stakes.