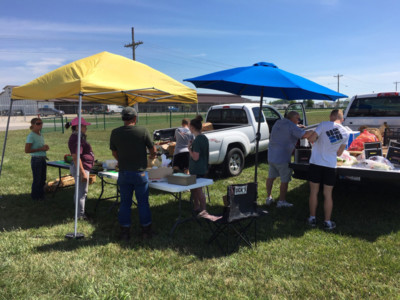 When COVID-19 restrictions prevented the creation of the community garden for backstretch workers at Indiana Grand, Brian Elmore, executive director of the Indiana Horsemen’s Benevolent and Protective Association (HBPA), came up with an alternative. A local group is now making a weekly stop outside the stable gate to provide fresh produce for those who work at Indiana Grand.

“Brian (Elmore) noticed a group selling produce to raise money for mission trips in nearby New Palestine (Indiana) and made arrangements for them to provide the same service for the people that work and live on the backstretch,” said Otto Thorwarth, one of the chaplains with Indiana HBPA. “Without being able to have the community garden this year, he wanted to make sure these folks had access to fresh produce on a consistent basis.”

To sweeten the deal, Indiana HBPA is paying 50 percent of the cost of the produce, which offers it to individuals at a 50 percent discounted rate. Those purchasing the items must show their Indiana Horse Racing Commission license to be able to participate in the purchase at the discounted rate.

The fresh produce stand is available each week in July on Wednesdays from 11 a.m. until 1 p.m. next to the soccer field. The stand started Wednesday, July 8 and has already proved to be a big hit and a nice option for those individuals that fall under the Indiana HBPA umbrella.

One of the most popular items has been sweet corn. Other items that sell quickly include tomatoes, various peppers, peaches, cantaloupes, cucumbers and okra.

“We initially set it up for the month of July, but with the success it has already had in just two weeks, I’m guessing we will extend this through August,” added Thorwarth. “People are really enjoying this and taking advantage of the service. And it’s for such a great cause. It’s a win-win situation all around.”