Jesus’ Team to Prep for Pegasus in Claiming Crown Jewel 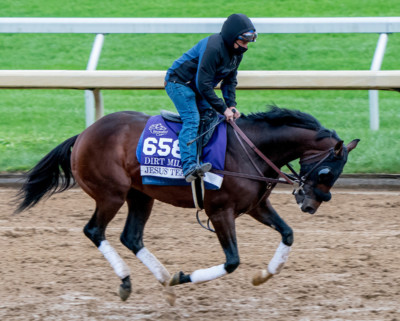 Grupo 7C Racing Stables’ Jesus’ Team, who finished second in the $1 million Breeders’ Cup Dirt Mile (G1) at Keeneland in his most recent start, is scheduled to make his next start in the $150,000 Claiming Crown Jewel at Gulfstream Park Dec. 5.

Trainer Jose D’Angelo will use the Claiming Crown headliner, one of nine stakes for horses that have started for a claiming price at least once in 2019-2020, as a prep for the $3 million Pegasus World Cup Invitational (G1) at Gulfstream Park Jan. 23.

“I prefer a race before the Pegasus World Cup. I don’t want to work him up to that race from the Breeders’ Cup,” D’Angelo said. “He needs a race in December.

The 1 1/8-mile Jewel is restricted to 3-year-olds and up that have started for a claiming price of $35,000. Jesus’ Team broke his maiden in a $32,000 maiden claiming race at Gulfstream March 18 in his fifth career start. He came right back to score a seven-length victory for a $25,000 claiming tag May 8 before moving on to prove himself against graded-stakes company in his next six starts.

In his two most recent starts, Jesus’ Team finished a distant third behind Swiss Skydiver and Authentic in the Oct. 3 Preakness Stakes (G1) at Pimlico and second in the Dirt Mile, in which he closed from off the pace to finish 3 ½ lengths behind runaway winner Knicks Go.

D’Angelo’s stable is based at Palm Meadows, Gulfstream Park’s satellite training facility in Palm Beach County where Jesus’ Team will prepare for Gulfstream’s 2020-2021 Championship Meet that will get under way Dec. 2 and run through March 28.

“After the Breeders’ Cup, we sent him to Ocala for rest in the paddock and round pen for a week. He’s happy and healthy,” D’Angelo said “Now, he’s at Palm Meadows and will start training again.”

The nine Claiming Crown stakes attracted a total of 271 nominations, including 52 nominations for the $95,000 Emerald, a 1 1/16-mile turf race for 3-year-olds and up that have started for a claiming price of $25,000 or lower. Trainer Michael Maker, the all-time leading trainer in Claiming Crown history, has nominated 10 horses to the Emerald, including defending champion Muggsamatic.

The $95,000 Tiara, a 1 1/16-mile turf race for fillies and mares that started for a claiming price of $25,000 or lower, drew 27 nominations, including Herman Wilensky-trained Drop a Hint, who shipped from Gulfstream to Belmont for a third-pace finish in the Sands Point (G2) last time out.

The $90,000 Distaff Dash, a five-furlong turf sprint for fillies and mare that have started for a claiming price of $25,000 or lower, drew 34 nominations, including Maker-trained Jakarta, who captured the Powder Break during the Championship Meet at Gulfstream before finishing third in the Franklin County (G3) at Keeneland last time out.

The $90,000 Canterbury, a five-furlong turf dash for 3-year-olds and up who have started for a claiming price of $25,000 or lower, also drew 34 nominations, including Tom Albertrani-trained Fiya, who has won four straight races, including the Maryland Million Turf Sprint at Laurel last time out.