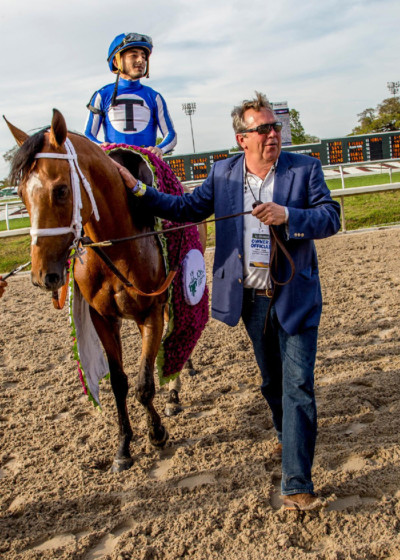 Chester Thomas is a businessman and entrepreneur from Madisonville, Ky. His Allied Racing stable ranks No. 7 this year in North American purse earnings at $1,013,208. The following first appeared as a letter to the editor in the June 6, 2020 Thoroughbred Daily News and is available for publication elsewhere as an open letter to the industry. Photo: Chester Thomas leads in By My Standards and jockey Gabe Saez after the 2019 Louisiana Derby win (Hodges Photography)

The past two years Allied Racing LLC has achieved our dreams of competing at horse racing’s top level, headed by my first multiple graded-stakes winner and Kentucky Derby runner By My Standards and multiple graded winner Mr. Money. I’d hoped it was just the start of being in the top ranks of the sport we love dearly.

But even as my wife and I ride this incredible wave, we plan to significantly downsize our stable.

Why? Because of the movement to phase out the medication Lasix, a diuretic also used in humans.

The welfare of our equine and human participants must always come first. That’s why it’s mind-numbing that the industry’s power brokers point a finger at Lasix while diverting attention from legitimate issues such as track surfaces.

Everything I earned in racing last year was channeled back into buying more horses. Not so in 2020. Until the picture becomes clearer as to how these horses do with no Lasix, I will not be buying any yearlings from Keeneland or elsewhere, nor will I buy any 2-year-olds in training. We will reduce our broodmares by one-third and sell at least two-thirds of our homebred babies.

I’m going to wake up this time next year and I will not have 71 horses, I promise you. It’s very difficult to break even in this business, much less to make money. As we are force-fed these ill-advised rule changes, turning a profit will become even more of an illusion.

Yes, horse racing has problems. Lasix isn’t one of them.

Phasing out Lasix will not phase out the issue of Exercise Induced Pulmonary Hemorrhaging, the official name for bleeding. Attempting to manage this condition instead will require expensive treatments starting well in advance and after a race. The additional veterinary bills replacing what had been a very effective $20 Lasix shot will help drive middle-class horse owners away from the game. It is nothing short of class warfare.

Research suggests EIPH is systemic to the species, not hereditary, and Lasix helps to prevent or reduce bleeding. Lasix — given four hours before racing by state veterinarians and the only permitted race-day medication in the vast majority of jurisdictions — is a very closely monitored, highly regulated, transparent and effective program proven over the past 40 years to be in a horse’s well-being and best interest. Running a horse on Lasix also is a choice, and should remain so.

To this point, there is no credible study that administering Lasix causes horses to suffer bone or soft-tissue injuries. There is substantial science that the medication helps prevent or reduce the incidence of bleeding. Lasix allows horses to run to their God-given ability and nothing more.

But increasing the chances that a horse will experience EIPH also increases the chance that the horse won’t run to its ability, which ultimately reduces its value, possibly to zero.

I believe these new rules will not only dramatically hurt the business but will discourage new participants and the betting public.

The new Lasix rules play into the hands of animal-rights extremists, who in my opinion are salivating for a photo or video opportunity to present itself. They want to see our horses bleed profusely to hand them more emotional ammunition allowing their pursuit to end all horse racing.

And you know the pre-Lasix way to try to prevent EIPH? Withholding water and hay for 24 hours or more before a race to get the same effect that Lasix does humanely in a short time frame. Think of that as an optic.

There are plenty of ways that horses don’t pan out, including being too slow or even self-induced injuries. Why make it even harder for an owner to be successful?

I’m waiting for someone to announce their plan to produce horses that don’t bleed, rather than leaving us poor suckers who buy them holding the bag if they do. If breeders truly believe EIPH is hereditary, perhaps they should stop putting known bleeders into the reproductive pipeline. They are talking out both sides of their mouth.

I have been a horse-racing fan my entire life, going to the track as a kid with my dad. Now, even as I achieve my dream, I have to question if there’s a better way to spend my hard-earned money. I know I’m not alone.

If our industry is on a quest to eliminate catastrophic injuries then we need to be improving track surfaces – not deflecting the media through a partial elimination of Lasix which actually benefits our horses.